Which system is the better option? Read through to learn more on how Brewer’s Edge Mash and Boil vs. Grainfather compare.

Let’s find out what Brewer’s Edge Mash and Grainfather are and what benefits they have.

Brewer’s Edge Mash and Boil is an easy brewing system that eliminates the need for three-pot systems or burners. It has a 16 lbs malt capacity that allows you to brew up to 7.5 gallons of beer. It has two different systems; one with a built-in pump and another that doesn’t.

Brewer’s Edge Mash and Boil is a double wall system made of stainless steel for durability. It has a power output equivalent to 1.6 Kilowatts and a voltage requirement of 110 Volts enough for intense heating. 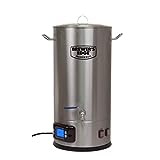 Grainfather is a fully-programmable brewing unit system that allows you to customize step mashing temperature and delayed heating schedules. It also features a Bluetooth-enabled control that enables you to control the unit from your phone. The unit also has a waterproof graphic display from which you can customize it.

The graphic display also lets you know when to do the following by alerting you. It has a maximum capacity of 8 gallons and a grain holding capacity of up to 20 lbs. Its body is made of 304-grade stainless steel.

Its power output is 1.6 KW and has a voltage requirement of 110-120V. It takes 20 minutes for this unit to heat up. The unit is supplied with a hop spider, wort chiller, sparge water heater, conical fermenter, plate chiller, and a fermenter cooling kit.

Grainfather Connect Complete All In One Home Beer...
Check Price

Here’s a look at the similarities and differences between Brewer’s Edge Mash and Boil and Grainfather.

The distinguishing factor of Brewer’s Edge Mash and Boil is its robust build. It features a stainless steel build with double walls that makes it durable.

On the other hand, the distinguishing factor for Grainfather is its control mechanism. It has a Bluetototh-enabled control system compatible with mobile phones, which lets you control the equipment using a phone. Besides, its intuitive design distinguishes it from Brewer’s Edge Mash and Boil. Its system is automated for step mashing and delayed heating.

When to Use Brewer’s Edge Mash and Boil

You can use Brewer’s Edge Mash and Boil if you’re a seasoned beer brewer. Its features and complexity give little chance to less experienced and seasonal beer brewers. You should also use this brewing system if you are on a budget as it consumes less power and doesn’t need any burners. It retails lower than Grainfather, providing value for your money.

When to Use Grainfather

You can use Grainfather if you’re a seasoned beer brewer. Seasonal and inexperienced Brewer’s can also use this beer brewing system. Its complete automated system makes it easy to use. The unit is not ideal for users on a budget as it is expensive.

Which Brewing System Is Better?

Grainfather is the best brewing system. It is a fully automated system that offers a wide range of features that are lacking in Brewer’s Edge Mash and Boil. For instance, it is fully programmable with automated settings for a delayed start-up.

It also has a mobile app that allows you to control the unit from your mobile phone. Its waterproof graphic display is also supportive in controlling the unit.